It’s been a while since an exercise class post, because I have become OBSESSED with 1 Rebel Rumble class.

I have been boxing my way through about eight classes last month (not showing off, had to sort out this Winter chub I was carrying round) and I just LOVE IT. I’ve DEFINITELY seen my overall strength and fitness improve.  Plus I am back in my pre-Xmas clothes. HURRAH!

I am feeling like my technique is improving. I mean if there were mirrors I am sure it probably isn’t, but I am living in a boxing make believe blur for now.

They do a technique class that I am going to try out soon… so I will keep you posted.

My lovely new friend I met in Ibiza on New Year was working in London, and rather than meeting up and getting bladdered (there’s time for that still) we decided to do a class.

How very on trend of us.

An ex-amazing dancer herself, I suddenly realised when I entered the class that “all levels” didn’t include mine.

We twisted and shoulder shaked and booty lifted to a one and a two and three and a four. Then, drop spin and it was straight onto the next section… but I was still confused at body contortion number one.

We clicked and twirled and shimmied to a five and a six and a seven and an eight. But then we moved into the next sequence… nooooooo wait for me!

I was a move behind, just like our old pal Dick Van Dyke in Chitty Chitty Bang Bang Classic Me Old Bamboo

The guy teaching the class was sh*t hot, and 70% of the girls in there were shit hot. When the music came on I realised the moves had been slowed down, and now we were going for “full tempo” to Drake.

Oh great! I mean when you can’t do a move slowly, you’re BOUND to be able to do it faster right? Right?

Put it this way, I was not shit hot. (There’s a reason I have put in stills to this post rather than the full CRINGE video I found online) 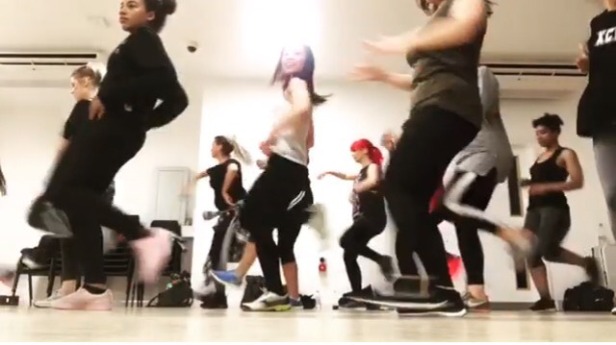 Hayley and I giggled through the class, she was shimming right on the beat with sass, and smashing it like I thought she would. I had my Fitbit on and didn’t want to let it down (I am sure it judges me for a shit work out) so I jumped around loads on the beat and hoped no-one noticed.

I mean they probably did, but then I don’t really care.

I think it’s great to get out and try new things. There should be no judgement.

There was a larger, older lady at the front, in her own world. Giving it bass face and putting me to shame with her moves – I love that dance can be an expression.

And I did take away a few moves… EY UP watch out dance floor I am coming for you!

Feel like the class would have been better if it was smaller. There was almost no mirror space for me to even try and practice (yes I am a bad workman blaming my tools). But I think also it’s about letting go with your twists and shoulder shakes and bringing in your attitude.

I mean it was UK’s Sassiest Dance Class after all.

The ones in the class who were properly good at dancing, broke a real sweat and it was mesmerising to watch. It turns out I am just not massively co-ordinated in that kind of time frame – sure loads of people who BLOOMING LOVE IT!

There’s loads of others to choose from too – Ed Sheeran, Beyoncé etc. So if you can LEARN a dance, then definitely give it a whirl.

Hayley – next time we are going boxing 😉

DIFFICULTY RATING: I would say hard, but I think as with all things, the more you go, the easier it gets. Plus if you’re a dancer, and you learn quickly – sure you’ll have it nailed in no-time.

STAR RATING: I am giving it a 3.8. It was fun, the time went super fast, I burned about 350 calories (thanks Fitbit), and I would go again!